As a parent of four children under the age of five, our founder, Tara Williams, was used to being sleep deprived, but her youngest, Luke, was another story altogether. At six months old, Luke was still waking up every 1.5 hours, and she was desperate to get some rest!


One night, in an effort to calm the ever-crying Luke, Tara carefully wrapped a heavy throw blanket over his body while sitting on their couch. "I noticed as soon as the weight was on him, he instantly calmed down. A lightbulb went off in my head: he needs a weighted blanket!" said Tara. From Tara’s 10+ years of working in hospitals, she was familiar with the use of weighted bean bags in the NICU and weighted blankets being used for children with autism.


She went online to purchase a wearable weighted blanket, but nothing popped up.
Tara asked her mother-in-law, a talented amateur seamstress, to try and sew a test product.
The first night wearing the prototype Luke slept 12 hours!  It was a dream come true for Tara and her husband.


"We couldn’t believe how immediately his sleep was improved." They tried it again for naptime and the following night and could not believe the consistency and success. Luke is now a toddler and his sleep habits are ingrained.


Tara was excited to share her invention with others. With very limited cash, and a lot of heart and determination to succeed – Tara bootstrapped her startup. In May 2019 Tara launched a Kickstarter that was successfully funded at nearly 200%. In September 2019, she launched her e-commerce store and has sold out every single month since, and in May 2020, she appeared on the season finale of ABC’s Shark Tank, landing a deal with Lori Greiner. Today, Dreamland Baby is sold in boutique and mass retail chains all over the country, including Nordstrom, Bloomingdales, Target, Motherly, Maisonette and more.
“Shark Tank put us on the map,” she said. “But no one could have predicted the demand or how quickly word of mouth would spread the product.  There are 3.6 million babies born each year in the U.S. and sleep is the hardest part of parenting.  A rested baby is so easy to care for.  A sleep deprived baby creates chaos and exhaustion.”


Parents are raving about the Dreamland Baby weighted sleep sack. “This sleep sack is nothing short of amazing” says Kara H. “A Godsend! 1000% recommend if you [sic] baby has trouble sleeping!,” according to Lisa S.  “Best investment ever- has worked like a dream,” says Debra W.


Tara has since expanded her product line to include the weighted sacks for toddlers up to 24 months and weighted blankets for children ages 3-8. The weighted sleep sack has become a must-have item on new parents’ baby registries, and the company is on track to help 100,000+ babies and families get a better night's sleep in 2021.
Press coverage

"So does {Dreamland Baby} live up to the hype? Absolutely."
This 5-star rated weighted sleep sack from 'Shark Tank' lives up to the hype 🙌
Motherly 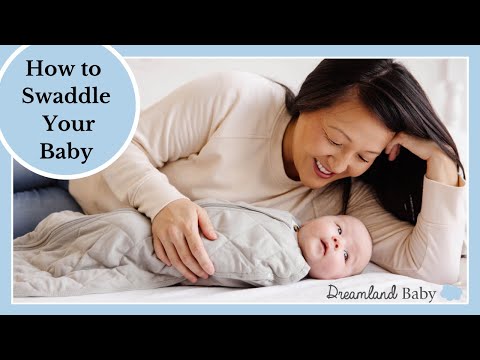 Download
Testimonials
★ ★ ★ ★ ★
"This sleep sack has literally saved our sanity!!! THE VERY FIRST NIGHT he slept from 9pm-2am...then went back down until almost 7!!!! He has NEVER done that before! He is a consistent 2-3 hour waker. But not any more!! Every night hasn’t been as glorious as that first night, but we have had a major shift in his sleep since we got this. Thank you so much!!"
Amanda C. Verified purchase
★ ★ ★ ★ ★
"My son absolutely loves his sleep sack. I started putting him in it right when he turned 4 months old, and he slept 10-12 hours straight through the night ever since (he’s 6 months now). High quality sleep sack, we’ve washed it several times and it washes well. I’ve told all my friends it is one of my “must have” baby items."
Chelsea S. - Verified purchase
★ ★ ★ ★ ★
"I cannot say enough amazing things about the @dreamlandbabyco weighted swaddle/wearable blanket. Lilah instantly calms down when I put her in her @dreamlandbabyco wearable blanket. A true game changer in our life. She’s sleeping 6-8 hour stretches now. I am a true advocate to say this really WORKS! ."
@lindyjboymom
★ ★ ★ ★ ★
"Herschel has been using his weighted sleep sack from @dreamlandbabyco for a few months now and I can honestly say it has been a game changer for him! For 10 months he didn’t sleep through the night, but once he began using this he has slept a minimum 10 hours each night 🤯 I regret not getting one sooner 😂 "
@amandamariebartlett